Ryan and Courtney Bell Join Our Glendale Family on January 24, 2021 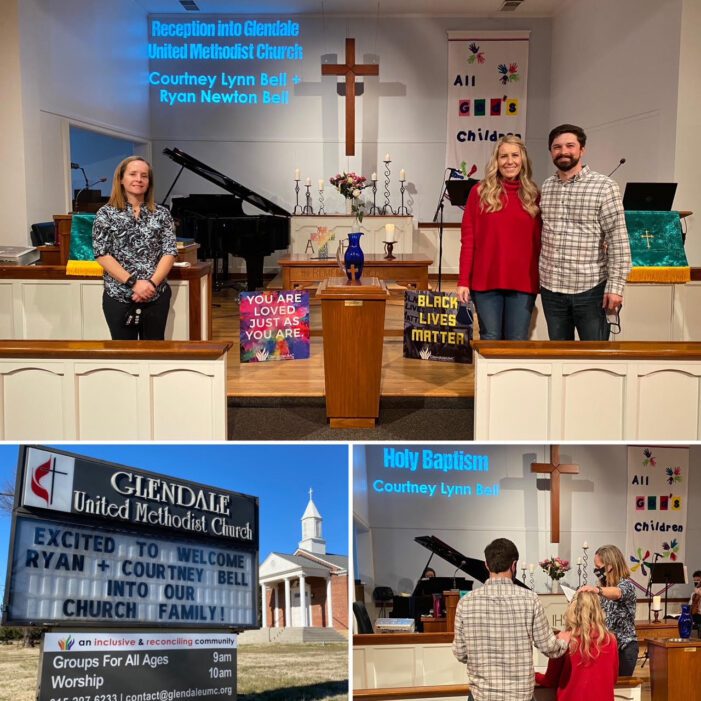 We are so thankful that these two amazing people chose us to be their church family! We celebrated the baptism of Courtney Bell and welcomed both her and Ryan Bell officially as members during worship on January 24, 2021 – such a beautiful day!

A little bit about Ryan + Courtney: Courtney is originally from Kingsport TN but has made Nashville her home for the last 10 years. She leads the research and innovation team at a state-wide education nonprofit. Ryan is a Nashville native who works as a recruiter and actually grew up just a few blocks away from Glendale.

Early in 2020 they decided to visit Glendale after months of driving by one of the billboards in Nashville. They weren’t necessarily looking for a church, but immediately felt at home because of the amazing people of Glendale. When the pandemic hit less than a month after their first visit, they wondered whether or not they would stay engaged, but through some of the hardest times of their lives, the Glendale community always found a way to support them right when they needed it most. In Glendale, they have found a community of faith that they weren’t sure was ever going to be a part of their lives, after both having complicated relationships with church in the past. They are so thankful for the privilege of getting to call this church and these people family.

Glendale UMC - Nashville
900 Glendale Lane
Nashville, TN 37204
615.297.6233
contact@glendaleumc.org
Want to meet with Pastor Steph
at Glendale or go grab a cup
of coffee nearby? She'd love to - click here to send her an email.